Thoughts on the ocean, the environment, the universe and everything from nearly a mile high.
Panorama of The Grand Tetons From the top of Table Mountain, Wyoming © Alan Holyoak, 2011

We think we are so clever...but are we, really?

I teach zoology.  Part of the fun of that is that there are around 30 unique animal body plans, and each one has its own range of sizes, shape, behaviors, and lifestyles.

Another thing that makes zoology fun is that when I watch sci-fi movies I enjoy looking and the sci-foi critters and see which real-life animal parts and pieces the "creature creators" chose to assemble into the creature for their movie.

The other day my daughter and I went to the theater and saw "Star Wars: The Phantom Menace" in 3D (the 3D is, IMO, just a gimmick and doesn't add much).  While there, I took a close look at the Gungans Boss Nass and Jar Jar Binks, and I started thinking about what kind of animal they might be based on.  Here's what I came up with.

To make creatures more appealing or familiar you make them bi-pedal.  If you want them to he scarier (or you have a bigger budget), add more legs.  Obviously the creature creators wanted the Gungans to present a combination of familiarity and comic relief, but not be too buddy-buddy with humans - so they have no hair and sloping or flat foreheads.

OK, what animals are Gungan-esque?  My vote?  Mudskippers!  Check them out in this short video clip.  These are Japanese Blue-spotted Mudskippers.

Except for the teeth, doesn't Boss Nass remind you of a fighting mudskipper? 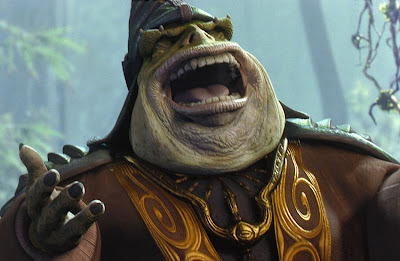 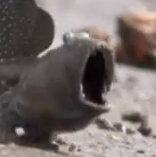 And the bulging eyes of the Gungans are extremely mudskipper-ish, even though Gungans also have prominent nostrils. 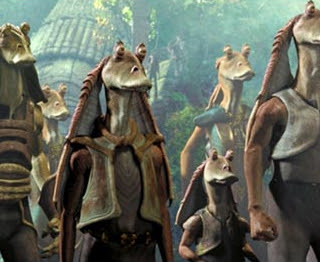 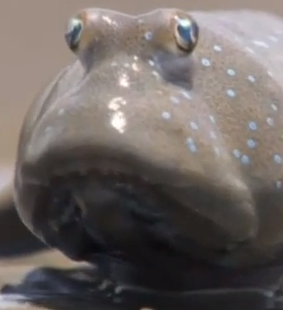 So, are we REALLY as clever as we like to think we are?  I'll grant that we can mix and match, and cut and paste, but so far with extremely rare exception every sci-fi critter I've seen is just a creative mixture of parts and pieces of real but usually unfamiliar creatures that live out there...somewhere.

My final conclusion...nature is more clever than we are!

At least that's what I think.

You can read my random thoughts at idaholyoaks2.blogspot.com.

You can read my thoughts on science and the environment at idaholyoaks3.blogspot.com.

And you can see my photography at idaholyoaks4.blogspot.com

Thanks for visiting! Come back soon!